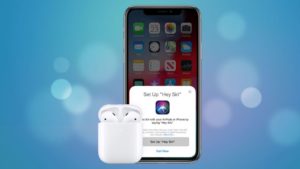 After 2 years since the introduction of AirPods, apple’s new AirPods have arrived this year. Though from a design perspective, nothing much has changed but apple has packed it with some pretty powerful features. Let’s take a closer look at its specifications.

The 2nd Generation of AirPods is priced at ₹18,900. This time the AirPods come with the wireless charging case instead of the standard AirPods case. With this move, Apple is shifting towards a complete wireless lifestyle, thus no longer you have to struggle to find those strangled wires.

Coming to its design, apart from some minor changes in the AirPod case, nothing much has changed since its predecessor. AirPods look pretty much identical to its first generation.

However in terms of performance, AirPods now comes with apple’s all-new H1 chipset, which according to apple allows a faster connection, lower latency and up to 50 percent more talk time compared to the 1st generation AirPods and even enables hands-free “Hey Siri” feature which I find pretty handy during the workout. Additionally, the chip allows faster switching between your iPhone and Apple Watch. You can also connect these AirPods to apple tv, iPad or even MacBook. Apart from that even if you are an android user, you can still connect them with your smartphone thus making AirPods compatible with almost all the smartphones out there.

Considering how loud these can get, I’m impressed with the highs. Just like the regular wired EarPods, the mids are given a huge boost in these. Overall the AirPods have a very consumer-friendly sound, making it a perfect companion for the workout.

Overall the AirPods are very easy to use, easy to carry and even easy to charge. Apart from that the charging case is amazingly built and easy to carry (removing one bud to pause or play music works perfectly) and the connection rarely drops. Plus, the 2nd generation of AirPods gives even more battery life and you can charge the case wirelessly which is a nice little addition.