Arunima – a dancer who educates as she performs 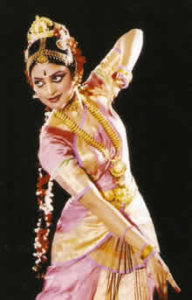 I first saw Arunima dance before a TV camera in Lodhi Gardens. The effortles ease with which she glided through her steps almost simulated levitation. She is one of the India’s most versatile leading young Kuchipudi dancers.  The senior most disciple of the renowned dancing duo, Padamashree Guru JayaRama Rao and Vanasree Rao, she started learning Kuchipudi at the age of seven.

As a young girl of 9, Arunima acted in the ballet “Amrapali”. The Kuchipudi Dance Academy formally launched her in 1995 where she performed her ‘Arangetram’ at the Triveni Kala Sangam, New Delhi.  Since then there has been no stopping her as she pursued her art with relentless devotion to achieve soaring heights in the field of classical dance.

Her dance is different from the way most others perform. It is interactive. She assumes that her audience doesn’t necessarily understand the significance of bhavas and mudras. At a recent performance in the Malvia Durbar hall of Banaras Hindu University she endeared the audience not only with her performance but also with the way she conducted it like a lec-dem (Lecture Demonstration). She had been invited by the Sanskrit Akademi and she chose to perform the ‘Nala Damyanti’ story from the Mahabharata.

Nala was a valorous, handsome, and popular king. He heard about the beauty of Damayanthi – the princess of Kundinapuram in Vidarbha, and decided to make her his consort. It so happened that when Narada visited Nala he spoke glowingly of Damayanthi and  also told him that she would make an ideal match for our now besotted king .

The lovelorn King tries to distract himself by composing music and loitering in the royal garden. Suddenly one day he sees a beautiful, golden swan by the lake. Nala creeps upto the sleeping bird to capture the swan. The swan is released after persuading Nala that he will play cupid and win Damyanthi over for the King –

The cupid swan proceeds to Kundinam, and is amused to find that Damayanthi  was also pathetically lovelorn. Obviously she too had heard of Nala’s fame. He attracts her attention, lures her away from her companions- and eventually pretends to have come into her clasp – he teases her about her childishness. This scene was rendered in a charming fashion – the swan consoles Damayanthi, narrates Nala’s goodness and eligibility and promises to help them. One can easily gather that there was a lot of scope for abhinay and the dancer exploited the theme to perfection. As Arunima quips in her eloquent style; ”dancing is like dreaming with your feet”

She was also invited to perform for the Honorable President of India at Rashtrapati Bhawan in June 2006.

Recognition has also come to Arunima in the form of the State Government of India Sahitya Kala Parishad Scholarship for Dance in 998 and the Shringarmani title by Sur Shringar Samsad. Besides being empanelled as an Established artiste at the I.C.C.R.,  Arunima is also an A grade artiste of the All India Radio and Doordarshan. Her appreciative reviews and dynamic profile have been featured in all leading television and radio channels (Doordarshan, Sony, Aaj Tak, Star News etc) and newspapers including Hindustan Times, Times of India, Indian Express, Business Standard, India Today etc., She also featured in the London School of Economics Newsletter for her outstanding performance. In en endeavor to share the joy of being closely involved with India’s rich cultural heritage, she has also worked for SPIC MACAY, a voluntary cultural organization as its Planning and Finance coordinator. She is also a member of a GATI, a young dancers’ art forum.

Besides Dance, Arunima has also excelled in academics. She earned a Bachelor of Arts degree in Economics from India’s prestigious St. Stephen’s College and then studied MSc in Accounting and Finance from the London School of Economics.  Her outstanding performance led her to teach at the LSE summer school in 2002.   After completing her teaching assignment, she returned to India to continue with her dance. Until recently, she was managing a career in management consulting at a leading US based firm. She is now focusing to build her own arts foundation to promote performing arts across the globe. Arunima has also successfully ventured into dance choreography and research to explore different creative aspects of the performing arts

She is also a keen Pistol shooter and has won several medals in State and National Championships, including a Gold Medal in national Championship in 1999.  She was also, the Captain of the Rifle Shooting Club in her college and received College Colors for her outstanding performance in Shooting.  She is also the recipient of theGovernment of India Sports Talent Search Scholarship (1991-1992). She is also keenly interested in dramaticsand has performed in several radio and TV programs (Yog Yatra on Star news etc), music videos and commercials.

However Kuchipudi continues to be her abiding passion, which she pursues with relentless devotion.

Endowed with “a pair of large eyes, a mobile visage and attractive stage presence”. Arunima is a devoted dancer with a promising career ahead…..

An Arangetram in dance is like an airplane pilots first solo flight – an announcement to the worldthat you have arrived and can now go it alone. Shruti Gurudanti is still in school, in class twelve, she had her Bharatanatyam Arangetram this Sunday after having practised dance since the age of eight. The debut performance was also the dancer’s personal saga of courage – despite a knee operation last November, she chose to go ahead with the show. Shruti’s performance was technically flawless. Credit would also go to her Guru, Vasanthi Sridhar, who was able to inspire her to work so hard for her performance.

Gurudanti’s rendition started with Pushpanjali in Raga Tala Malika. An offering of flowers to the audience, with brisk and agile light footed movements which built up toa crescendo of the pulsating beat of percussion. This was followed by Khanda Allaripu set to Khanda Jati. This is a short and crisp item symbolising the flowering or openingup of the body as a warm up for the more difficult pieces that follow. Shruti used fluid movements of the shoulder with neck and eye rolls to embellish this dance sequence. In Jatiswaram, which is a combination of jati (rhythmic syllables) and swara, the dancer used side stepping with symmetrical and circular movements of the arms. She gave an inspired performance of pure Nritya, drawing repeated applause of the audience.

Not many of the celebrated Gurus these days create worthy disciples, for fear of creating competition for themselves. An insecurity that Guru Sridhar does not suffer from.Under the aegis of Prashanti Natya Nilayam, she has conjured up a number of collective Arangetramn’s and Dance Drama’s to introduce her young disciples to the real world.

Above: (L) Guru Vasnathi Shridhar
(R) Shruti Gurudanti
Varnam was the piece de resistance of the show. Through abhinay the danseuse described the naughty Krishna and how he enchants the Gopis with his pranks. The vanishing trick is used by him while playing hide and seek with the Gopis, and the audience is bemused by the intriguing confusion he creates in their mind by insisting that he was always there. The transformation of this prankster to a full fledged artist by melodiously playing the flute along with the accompanying instruments to placate the agitated gopis is a popular sequence in Bharatanatyam. The nayika is so much in love with Krishna that she has lost consciousness of her own existence.

Shruti displayed a range of expressions as she recreated the Draupadi cheer haransequence playing the wily Duryodhan and the anguished Draupadi alternatively. The sequence included the sight of the little Krishna dancing on the poisonous snake Kaaliya Varnam was set in Ragam “Mohanam”, Talam “Adi”.

Padam “Padari” set to Ragam “Kamboji” Talam “Roopakam”, is a endearing interplay between the nayika who has recently fallen in love and her sakhi who is her confidante. The sakhi pretends not to care or bother about what she was being told. She only appears to admire her own self and strut about without a care in the world. The nayika ultimately pleads to her sakhi to go fetch her lord for her. Shruti concluded her recital with the Tillana. in Ragam “Kadanakuduralam” and Talam “Adi”. The young danseuse displayed a great promise, provided she applied herself and internalised the moods of abhinay. Something that will follow with age and practice.