Film festival – to be or not to be

Film festival – to be or not to be

As the 34th International Film Festival of India drew to a close it continued to be in a debacle, thanks to the continuous indecisiveness about its character. From a fairly prestigious beginning it has been brought down to shambles because of the lack of empowerment of the people running it, starving the festival of funds and changing its location every time. Why shift the national festival to Goa? Why mix tourism with serious cinema? Why spend millions of rupees to develop infrastructure and then invest all over again in another city. These are some important questions which will have to be answered before the venue is shifted again. As far as the films are concerned it was a mixed bag as always. There is space enough only to discuss some of the films which I liked.

Pajn-e-Asr was an Iranian film based in post Taliban Afghanistan. It was about innocence and ambition in a country ravaged by its earlier rulers and how a young woman, Agheleh (Noqleh), tries to find a future for herself and maybe even become the President of her nation. No harm in dreaming. Her admirer, a poet and a fellow refugee, in the war torn land, puts up her portraits in an abandoned palace. The film ends in a desolate landscape where she and her father have to burn the horse-cart, which once transported them, just to keep warm at night. The conservatively religious father loses his son, his grandchild, and his horse in the land which according to him was becoming increasingly blasphemous. They meet another old man in the desert who was going to Kandahar to re-elect Moola Omar. “Too late,” he is informed, “the Americans have already overthrown him.” The film is directed by Samira Makhmalbus, who became the world’s youngest director to participate in the official section at the 1998 Cannes Film Festival.

Undoubtedly the most talked about film in the festival, Dogville, directed by Lors Von Tries, is a highly stylised film, more theatre than film. The entire film is shot on a set representing a small town, Dogville,  in which most of the set is drawn on the studio floor, which looks like an architectural drawing, complete with labels. Only the dimensions are missing. The central character is an exasperatingly self suffering and a stubbornly stoic woman, Grace, whose role has been played with a remarkable intensity by Nicole Kidman. Grace is on the run from Gangsters and the town shelters her at a price which goes on rising. The film is an interesting study about how seemingly respectable and apparently well meaning individuals become more and more savage. Just when the audience has had enough of the citizen’s sadism, Grace gets her sweet revenge. The Head Gangster turns out to be her own father. In the entire film you never get to see the open sky, except once, when a window curtain is drawn away. This adds to the claustrophobic nature of the story.

Yes Nurse, No Nurse, Directed by Peter Kramer, is a delirious, all‑singing, all‑dancing romantic comedy revolves around the eccentric denizens of an Amsterdam rest home and the killjoy neighbour who wants the whole lot of them evicted. Chock full of over‑the‑top1960s set design, tinted postcard tableaux and lush, split‑screen visuals, the film’s cheerfully rude musical numbers would have the audience tapping its feet. Based on a Dutch television show from the 1960s, Yes Nurse, No Nurse is the musical tale of Nurse Klivia (Loes Luca), who runs a rest home populated by a gang of lovable nutcases next door to the cranky Mr. Boordevol, who is constantly looking for ­a way to get Nurse Klivia and her rowdy “patients” evicted, and may finally have found a way when a young, hunky burglar with a heart of gold (Waldernar Torenstra) moves in with them. The film ends endearingly with a change of heart of the nosy neighbour.

At the age of 84, Sri Lanka’s leading director Lester James Peries returns to the international stage after an absence of almost 20 years with Mansion by the Like. With 18 features to date this classic veteran filmmaker has not only brought his country to the forefront of Asian cinema, but also inspired a whole generation of Sri‑Lankan film makers. The film is inspired by Anton Chekhov’s Cherry orchard, and although it has been adapted to the local milieu the characters drawn from the play are mostly true to the original. The film has been shot in visually pleasing locale- in a dak bungalow next to a reservoir. The direction is tight and conservatively classical. All the emotions are neither over stated nor under stated by the actors and actresses who have given taught and controlled performances.

Me, Kash & Cruise – A Competent and Cleverly Crafted Production of Significance
A  Review by Manohar Khushalani 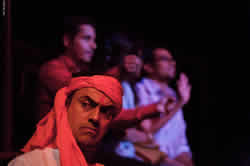 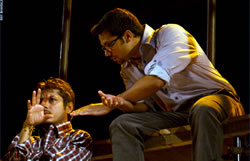 As a finale to his earlier plays: Class of 84 and Pune Highway, Matrix Presented Rahul Da Cunha’s last one of the trilogy, Me, Kash and Cruise at India HabitatCenter. For me personally it was a watershed of memories. The play opens with a backdrop of 1984 Bombay Riots. It was in 1984 when our street theatre group,Theatre Union, disembarked at Mumbai’s Churchgate Station to participate in the Natya Jatra, a festival of Street plays performed by Theatre Workers and activists from all over India. It was at the railway platform itself that we learnt that Indira Gandhi had been assassinated by her Sikh Bodyguards. We arrived at Rabindra Rangshala, the venue of performance to learn that all the shows had been cancelled. Not to be deterred we proceeded to Flora Fountain for our first impromptu performance. Despite the tragedy my sense of humour about the irony of the situation had not abated as I showered my jokes on my hapless colleagues in the local train to the venue of the show. Apparently a pick  pocket was not amused or maybe he decided to have the last laugh as he slickly dispossessed me of my purse, which contained all my finances. But the show must go on and perform we did to an appreciative audience.

In the next ten days we were all stuck at Rabindra Rangshala as the trains were not moving and all the theatre groups performed for each other. Just as a singer is requested for an encore, our rendition of Sadat Hasan Manto’s Toba Tek Singh was most popular, and we performed it repeatedly for other groups. No. One is not going on a tangent. I am coming to the point.

Amongst the performers was a troupe led by Gursharan Singh, A famous Sikh playwright director from Punjab who performed courageously against militancy inPunjab.  Throughout our incarceration we continued to hear all kinds of rumoursabout how Sikhs were being butchered in the communal riots in Delhi. There were also rumours about protection money given by them to the Underworld for remaining safe in Mumbai. One had also heard about how Shiv Sena in Mumbai and RSS inDelhi had offered protection to the Sikhs. In an environment of fear and fervour – with and without veracity – roumours abounded. It is this atmosphere that Rahul Da Cunha’s play captured with authenticity, that one can vouch for, from personal experience.

Set in Bombay, the play covers a twenty four year time horizon – 1984 to 2008.Bombay has been a city that encompasses every emotion – from nostalgia to frustration. And joy to fear. Me, Kash and Cruise is the roller coaster story of three Bombayites and their attempts to deal with the city’s ever changing social, civic and political landscape – with mostly hilarious, and sometimes tragic consequences.  The play opens with the death of Indira Gandhi, while the three protagonists – Pooja Thomas (unabashed Bombay lover), Rajesh Kashyap (true blue South Bombayite) and Cruise (A Delhiite, and named after the Hollywood star) traverse their way through the 1992 riots, the 1993 bomb blasts, the Moral Police and Bollywood mania, as well as the age of marketing and hype – among other dramatic events that have shaken and influenced our city. Including man made disasters such as dug up roads and festival band baaja. And of course, Himmesh Reshammiya !!

Da Cunah’s assembled and portable set design is a labyrinth of multi level cat walks with interconnecting stairs – almost a reflection of the intertwining relationships of the three main characters torn apart by their own complexities and yet thrown together by circumstances and similar interests – primarily theatre, Pooja Thomas and Rajesh Kashyap are well grounded bombayites. Cruise a typical “struggler’ from Delhi 6 – the place in Delhi which has contributed maximum actors to Delhi Theatre.  Since Cruise is trying to ‘make it’ while the other two are established in the city there is bound to be a difference in their priorities. While Pooja is attracted by; the entrepreneur spirit of Cruise, Kashyap disapproves of his lack of commitment to theatre. Da Cunah script comes to terms with these realities in an objective manner. He also sketches out how their relationships and lives change with the external influences of the traumatic political events that rock the city.  How people cannot remain unaffected islands and how the social upheavals suck people into their vortex. The director is very original in the way the blocking has been done. People can be interacting with each other directly, but from different levels. Even the classic ‘asides’ can be belted out from different spaces. The division of the stage is not the typical horizontally segmented ‘upstage’ and ‘downstage’ but more literally – vertically – up down and middle levels.

The performances of the three actors Yamini Namjoshi, Amit Mistry and Neil Bhoopalam are fluid and flawless. The well known actor Rajit Kapoor does many roles of the other characters. He is the fourth character, mysteriously namedBOMBAY winds away though the play, donning many guises and avatars – Gateway photographer, police havaldar, marketing executive etc.