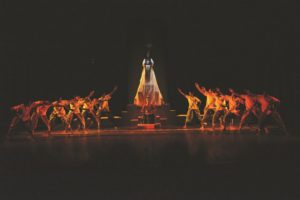 This play is said to be the first poetic play in Kannada. In this play Ashwatthama, an immortal hero from Mahabharata, is transformed by the author to enable him to meet his tragic end. The play breaks from the traditional image of Ashwatthama as one blessed with the gift of immortality. Aswatthama in the Mahabharata is a bachelor while in the play he is married and has a son called Rudrashakti. Ashwatthama attempts to avenge the death of his father (who had been deceitfully killed by the Pandavas) by attacking them at night. However, he ends up killing their young children and is so embarrassed that he takes his own life.

Ashwatthaman throws light on how fate plays a vital role in the life of a powerful warrior and an honest human being named Ashwatthama, his character, personality, and his relationship with his father and guru Dronacharya. This adaptation of Sophocles’ Ajax into Kannada by B M Shri is a wonderful attempt of blending the story of Ashwatthama with the famous Greek tragedy. Being a theatre practitioner I have attempted to bring this play on stage to express my views on war.  A civilization evolves with the belief in harmony with everything around it. But in war, killing other people must somehow become acceptable–morally, legally and psychologically. One way to conceive this is to imagine that the enemy is a non-human entity. Ashwatthaman, in B M Shri’s haunting adaptation of Sophocles’ Ajax, comments on the hero’s crazed attempt to massacre his own comrades-in-arms, and is a metaphorical interpretation of the cruelty of war, an ongoing phenomenon from the mythological world to the contemporary world. This play is an attempt to make one realise how war is the wicked output of the human race and a paradox to the concept of civilization.

Jagadeesh. R graduated in Design and Direction from National School of Drama, New Delhi in 2013. He is also a sculptor and a musician. He won the state award for theatre music in 2006. He visited the 2nd Asian Theatre Festival at Beijing, China & NAPA (National Academy of Performing Arts) International Theatre Festival at Karachi, Pakistan. Currently he is working as the Director at Sri Shivakumara Rangaprayoga Shale, Sanehalli, Karnataka.

Belluru Mylaraiah Srikantaiah, known popularly as B. M. Shri, was an Indian author, writer and translator of Kannada literature. He was awarded the Rajasevasakta Award by the Maharaja of Mysore. He was the president of the Kannada Sahithya Sammelana in 1938 at Gulburga. B M Sri Circle, a circle in Bangalore, has been named after him.

Sri Shivakumara Rangaprayoga Shale is a residential theatre school established in 2008. The course is backed by 25 years of experience of Kalashangha and 15 years of the Shivasanchara Theatre repertory. This school is designed in the Gurukula system, with a broad syllabus adapted from the best theatre institutions of the country.