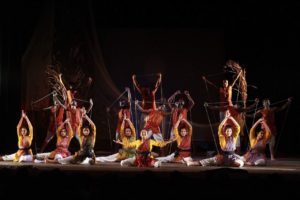 On the centenary year of Adwaita Mullaburman, we decided to prepare a play based on his momentous novel, Titas Ekti Nadir Naam. The play talks about fishermen societies residing on the banks of Titas in Bangladesh. The play talks about Titas’s change throughout years and its effect on the socio-economic structure of societies around. The love and loss of the main characters is the central attraction of this play. The play enters into climax when the fishermen society finds out that Titas is drying up. What will the fishermen do now? How will they survive? How does it really feel to lose the only means of life? How does it feels to lose a river?

The plan of making Titas Ekti Nadir Naam was there since my college days. The novel had a great influence on me, and I always wanted to express those elements with my language, my way of understanding. The first attempt at this play was in Tripura some years ago. Then in 2015, I directed this play but due to some unexpected situation we could not work with the play anymore, but the urge stayed. In 2017 I remade, rearranged, and rejuvenated the play in my style under the banner of my theatre group Alternative Living Theatre. Hope my attempt at this classic piece will be acceptable to the audience.

Born on 5th May, 1947, acclaimed playwright and director Probir Guha embarked on his career as a street theatre activist after graduation from Calcutta University. Initially he began working in Kolkata but soon becoming disillusioned with elitism, he established his own company, the Living Theatre, in 1977 at Khardaha. In 1991, Living Theatre was renamed as Alternative Living Theatre. From then till now he has been working as a writer-director of this group of rural-urban thought. He has worked with many renowned directors of theatre and dance worldwide. He is also a lecturer and teacher at several theatre schools and universities. Guha has been a common name among Alternative Theatre activists. He has received the Sangeet Natak Akademi Award for his excellence, along with other felicitations and awards for his contribution in alternative theatre practice.

Living Theatre was formed by Mr. Probir Guha in 1977 at Khardaha, a suburb in West Bengal. Later in 1990 it was renamed and re-registered as Alternative Living Theatre. It was formed with an earnest resolution to break the clichéd rules of theatre. It was determined that it would not merely entertain people, but will work towards waking them, as it believes that not just entertainment but theatre can also be the voice of the grass-root people. It dealt with difficulties of marginal people so instead of heading for the city it started penetrating into the interior of the villages and has performed in a small class room for ten years. Hence it has discarded monotonous grammatical acting and has experimented and evolved a new aesthetics of theatre where physicality is the language. Later on, it built its residential workshop and rehearsal space named Akhara at Madhyamgram, where theatre lovers from all over the world come to learn.